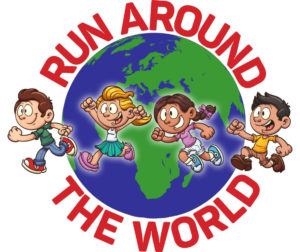 Scroll down to see the final route we took

All 24 schools across Ebor Academy Trust have successfully taken part in our challenge to Run Around the World.

Across the 31 days of May 2020, children, staff, family and friends ran, walked, cycled or wheeled the distance around the planet.

Make no mistake, this has been an amazing achievement. Well done to the many hundreds of people who rose to the challenge. You can download a  Certificate  here as a souvenir.

There are many physical and mental benefits of being active and keeping fit. Regular exercise combats stress and helps you sleep at night.

For a little while longer we will maintain a sponsorship page (www.justgiving.com/fundraising/eborworldrun), for people who are able to donate. All donations will go to charities that support the NHS. We appreciate these are financially difficult times, however, and there is no expectation to contribute.

For the record, the story of our journey, step by step

We’re off to a great start and after a hectic first weekend, we’ve collectively run 3,335 kilometres – which means we’re in Athens, Greece!

Our route started at York Minster, we ran to Hull and then kept running on the ferry across to Rotterdam.

We decided to stop off in Zurich on our way!

We decided to pop into Rome.

Let’s stop in Athens for a break… 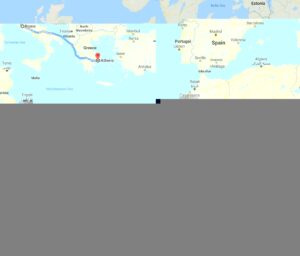 We decided to head nearer the equator and stopped off in Jerusalem (see new map below).

We then crossed Saudi Arabia and the Persian Gulf to land in Dubai.

We decided to visit New Delhi on our way through India. 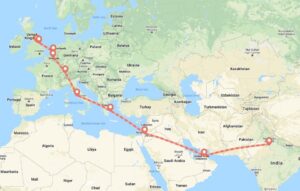 It has been a busy Bank Holiday weekend – we’re now in Chengdu, China! On our way through Asia we waved at Mount Everest as we zoomed past (see map, below).
Did you know:
Did you know:

OK, soon we’ve got an ocean to cross, so keep up your great work and we’ll easily overcome it! Where to next? Come back at the end of the week to find out. Don’t forget to include family and friends and make sure you log your distances!

We’re nearly half-way through our challenge and almost half-way around the world – we’re in Australia!

But before we start our momentous journey over the Pacific, we decided to stop off and have a little break in Cairns and see the Great Barrier Reef (see map, below). 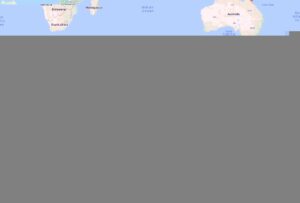 Where to next? Come back on Monday to find out. Keep it up this weekend, everyone, and don’t forget to include family and friends and make sure you log your distances!

Whew! After a busy weekend we’ve made it to Fiji! Next comes the long long long stretch over the Pacific Ocean! 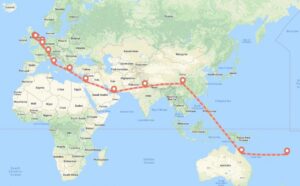 Where to next? Can we make it over the Tonga Trench? This is the deepest oceanic trench of the Southern Hemisphere and the second deepest on Earth! Check back here on Friday.

Having set out boldly across the Pacific we’ve stopped off at Adamstown in the Pitcairn Islands. We have travelled over 26,000 kilometres!
Did you know:

Where to next? We’re about to enter our final week of the challenge and luckily, as it’s half-term, there will be lots of opportunities to get out and about and clock up some impressive distances. This is our last big push – there’s a long way to go! Don’t forget to get your family and friends involved. Check back here soon to see how we’re getting on.

We’re homeward bound, over 31,500 kilometres in and we’re sailing past the famous Galapogas Islands (see map, below). This is where Charles Darwin spent five weeks in 1835 which contributed to his “Origin of the Species” theory of evolution!

If we had gone straight around the world it would have only taken 40,000km. But, with the amazing work you all have done we were able to visit lots of interesting places on the way!

On the final stretch we travelled through:

We ran across the Atlantic Ocean in one go! No stopping here!

Here’s the route we took across the world during May 2020: 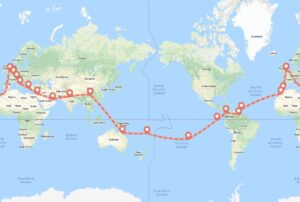