The trust runs 24 schools across York, Selby, the East Riding and The Humber and on the Yorkshire Coast. Ebor today is the 31st largest multi-academy trust in the country and was initially set up at the end of 2013 by Mr Ludlow to help a struggling primary school in York.

“I have enjoyed every day of my 33-year career in education,” Mr Ludlow told headteachers from Ebor schools at a heads’ strategy meeting. “The greatest thing about working in schools is that if you ever start feeling down, if things start to get on top of you, all you have to do is take a walk around school. Children have so much joy, unburdened by the worries of the world. It means you can get back to work reinvigorated, refreshed.”

Mr Ludlow established Ebor while he was headteacher of Robert Wilkinson Primary School, which he joined from Ralph Butterfield Primary School in 2004. He is a National Leader of Education, which carries an obligation to help improve other schools, and became chief executive of Ebor in 2015. His first headship was at Dishforth Church of England Primary School between 1994 and 1997. He has also established three international partnerships, in Madrid, Shanghai and Singapore.

He began his working career in banking.

All 24 schools from across the trust sent goodwill messages from pupils in a compilation video. Comments included: “You can retire knowing that you have changed many people’s lives” and “Things may end but memories last forever.” 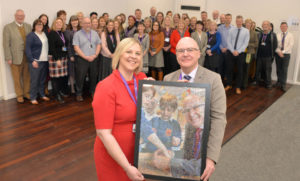