A new chief executive officer has been appointed for Ebor Academy Trust.

Gail Brown, currently senior executive headteacher, will take over from Richard Ludlow, who is retiring, on 1 February 2020.

Ebor operates 24 schools in York, Selby, in the East Riding and The Humber and on the Yorkshire Coast.

“Following a rigorous, national selection process, trustees are delighted with our eventual appointment,” said Tricia Ellison, chair of the Trust. “This is a crucially important role and we are confident that Gail’s strong track record within school improvement and leadership at a national, regional and local level will allow her to move into the role with confidence.”

“Her unrelenting and inspirational focus on school improvement will ensure that the schools in this great Trust will continue to go from strength to strength.”

Richard Ludlow said: “I have known Gail for many years and have the highest regard for her abilities. She has worked alongside me as the Trust grew. I can now retire at the end of January with confidence that the organisation we – the trustees and staff – have steadily built up, is in the safest of hands.”

Mr Ludlow, who spearheaded the establishment of Ebor in December 2013, received an OBE for services to education in the Queen’s birthday hours this summer.

Mrs Brown said: “I am grateful to trustees for putting their faith in me. I will continue to champion Ebor’s values of excellence, belonging, opportunity and respect and I want to thank Richard for his support and guidance. I am excited by the challenge this role presents together with the opportunity to make a positive difference to so many children’s lives.”

The appointment completes the Trust’s management restructure that also saw the appointment of Debbie Simpson as chief operating officer in September. 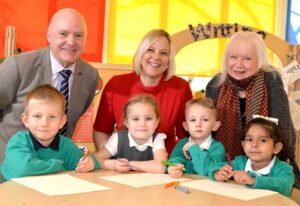