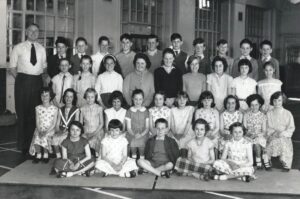 York’s Lord Mayor has made a return visit to her old school – for the first time in over 50 years.

e was Barbara Naylor when she posed with her friends for a class photo in the main hall at Haxby Road Primary School in the early 1960s.

Today, swapping her schoolgirl tartan skirt for civic ceremonial robes, Cllr Boyce has been back to see that while the building has stayed the same, the name has changed slightly to Haxby Road Primary Academy – and primary education has moved on.

“It’s so much more colourful, with some amazing resources,” she said. “And the children are learning things that I didn’t come on to until grammar school!”

“It is lovely to be invited back. I am impressed.”

Cllr Boyce toured the school with headteacher Zoe Lightfoot and answered questions from pupils ranging from “Are you friends with the Queen”, to “Are you posh” and “Why do you wear strange clothes?”

The Lord Mayor said of her time at the school: “I can still recall the smell on the stairs even though it is 50 years ago. There were outside toilets, hard toilet paper kept in a drawer in the classroom, kids having their bottoms spanked with a ruler, being scared to ask for my pencil to be sharpened and that revolting and slightly warm milk.”

She said she remembered the Lord Mayor of York visiting the school when she was there, even though she never dreamed one day she would be back in the same role.

Cllr Boyce was one of five pupils in her class to pass the 11-plus and move to Mill Mount School in York.

Zoe Lightfoot said: “The children were thrilled to see and talk to the Lord Mayor and they were fascinated that she used to be just like them.

“Who knows, the visit might inspire someone and in another 50 years, it all happens again!”

Haxby Road Primary Academy is part of York-based Ebor Academy Trust, currently comprising ten schools across Yorkshire and with another ten expected to join over the next year.