A thank-you letter from England football manager Gareth Southgate awaited a class from Staynor Hall Community Primary Academy in Selby when they returned to school after the summer break.

Year 3 pupils had written to the football boss following the national team’s defeat in the final of Euro2020 against Italy – and subsequent social media criticism.

“The children wanted to tell the team that despite the disappointing result, everyone was very proud of them and not to be upset at some of the negative comments on social media,” said class teacher Miss Hannah Spark, herself a football fan. “We had some really good discussions about resilience in class and the children had free rein in the letters they wrote. They were inspired and put some lovely letters together.”

Two big envelopes of correspondence were sent to Wembley and to England training camp St George’s Park and letters were also sent to individual players, including Leeds United player Kalvin Phillips. He also replied, thanking children for their messages. In his letter Kalvin Phillips said: “Although we didn’t make it in the end, we are very proud of what we finally did achieve. This was all down to our hard work and dedication, which shows just what can be achieved if you really put your mind to things.”

Gareth Southgate thanked the children for their “beautiful” work and said the team really appreciated the messages and heartfelt support. His letter said: “Even after the final kick of the ball, the examples of togetherness and resilience are so important for young people.”

Miss Spark said the children were thrilled to have had personal responses. “It’s amazing they would do this for us,” she said.

• Photo shows eight-year-olds Maggie and Grayson, with Miss Hannah Spark and the letters from Gareth Southgate and Kalvin Phillips. 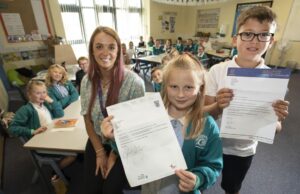