Starting the new school year with 11 schools – more than double the number they had this time last year – is York-based Ebor Academy Trust.

In York Robert Wilkinson, Haxby Road and Park Grove are now in Ebor, with Tockwith, Hob Moor, Hob Moor Oaks, Osbaldwick and Lakeside, plus the new Creative Arts Academy, due to follow soon.

They join schools in newly-established hubs in Selby, the East Riding and The Humber, and on the Yorkshire Coast.

Jeanette and Dave join Gail Brown and Richard Ludlow who will lead the York and Yorkshire Coast hubs. Richard also remains chief executive of the trust, which was established in 2013.

Executive headteachers have a responsibility to ensure an appropriate balance between quality assurance – holding schools to account – and school improvement support, to make sure Ebor schools achieve the very best educational provision.

“As Ebor grows and matures, I am delighted to welcome Jeanette and Dave, two exceptional school leaders, to our family of schools,” said Richard. “It is part of our plan to establish hubs of up to ten schools in each of four geographically close locations, and the new appointments are key in the continuous improvement of schools joining Ebor.

“We’ve come a long way since adding our first school, Haxby Road Primary, in February 2014. It needed urgent help and the only way to do it properly was to academise our founding school, Robert Wilkinson Primary,

and sponsor Haxby Road. We became the first multi-academy trust in York and quickly began to see the benefits of collaborative working – sharing best practice, developing our staff and, most importantly, improving outcomes for children. 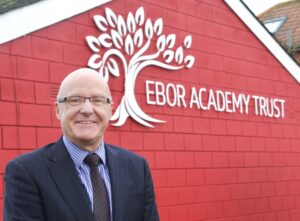 “In January 2017 Ofsted validated the hard work of a lot of people by awarding a ‘Good’ rating to Haxby Road – a tremendous achievement.”

Ebor has formed strategic partnerships with Early Excellence, a nationally recognised resource and training provider, to establish a centre of excellence and training facility for early years education. It will be based at Osbaldwick Primary, soon to join the Ebor family of schools.

And Ebor has also joined forces with Inspiring Leaders, a not-for-profit company comprising teaching schools and multi-academy trusts, to help advance the careers of teachers across the group.