Children have designed their own bunting to commemorate The Queen’s Platinum Jubilee celebrations.

In an Ebor Academy Trust-wide competition among all its 23 primary schools, three winners were chosen from a wealth of entries – Isla, aged 9, Haxby Road; Brooke, aged 10, Marfleet; and Sophie aged 11 from Sproatley.

The bunting was professionally produced and schools each received their allocation this week. The flags will help raise excitement levels across schools even further, as children take part in tea parties and other fun activities to mark The Queen’s remarkable 70-year reign.

Broadband suppliers to the trust, Talk Straight, sponsored the cost of the bunting and Agilico, suppliers of photocopiers and printers, sponsored the prizes, including a copy of the official souvenir book, ’70 Glorious Years’ for each school’s library.

As well as three eventual winners, there was such high quality among the entries received that Ebor selected 19 runners-up – the best entries from each participating schools other than the winners – and there are prizes for them too.

The York-based trust is also publishing colourful A2 posters which each school can display and there will be copies for the prize-winning children.

“Last year we played our part in celebrating the finals of the Euros and now we’re thrilled to be able to get our children involved in helping our communities celebrate The Queen’s Platinum Jubilee,” said Gail Brown, chief executive. “Big national events such as these don’t come along very often and when they do, we feel it’s important to make sure we commemorate them.”

Pictured above are children from Osbaldwick Primary Academy with the Ebor bunting. Front, from left, sisters Emme, Mia and India and at the back from left, Juan Diego, Deacon and Amelia – Amelia won the runners-up prize for Osbaldwick in the bunting competition. Below, Brooke, from Marfleet Primary Academy, shows her design which collected the most votes from judges. 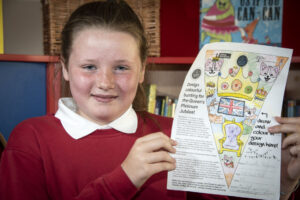